The concept of minority is the subject of an analytical approach which, in most cases, aims at identifying the specific traits of a group, traits which unite the members of this group and at the same time distinguish them from the rest of the community that encompasses it. These particular specificities may be of an ethnic, religious, linguistic, etc. nature, but beyond these general characteristics, the attempt to define the minority is tangibly and inevitably confronted with a complex casuistry which only makes it even more difficult to encompass in a unique and pertinent definition the particular situation of minorities.

The unprecedented global changes (population movements both within states and internationally, the emergence of new forms of communities) led to tremendous demographic changes, with the increased social and cultural diversity becoming a common challenge in all the states. The intercultural approach of socio-cultural relations in today’s society is a response to this cultural diversity, a perspective that encourages dialogue and the relationship between different cultures. Intercultural relations imply respect for diversity, overcoming mistrust through dialogue and debates on the foundations of collective life and society models. Intercultural education integrates major changes and challenges, focusing on mutual understanding and tolerance, adopting general principles and objectives closely linked to other educational programs.

Winning the unequal human struggle with natural forces and climate change implies both a subtle and long-lasting change in mentality, as well as the development of international instruments and mechanisms to combat the devastating effects that they can have in the long run on the quality of life of future generations. The catastrophic impact of climate change is not perceived correctly by politicians, neither by the press nor by the big financial markets. Existing but perfectible international mechanisms and instruments demonstrate a major concern that in this man’s unequal struggle with nature, the quality of life, his fundamental rights and freedoms will be preserved and guaranteed by globally ratified mechanisms and instruments, and even if their efficiency and implementation often prove to be difficult, what matters most is the consistency and seriousness with which the effects of climate change on human rights are addressed globally. 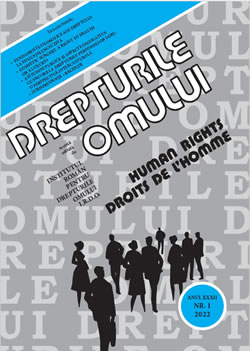