Whereas democracy is the exercise of power by the people, the referendum is often presented as a last redoubt of pure democracy in a political world dominated by the representative system. But can it be thus qualified, regardless of the method of regulation? This study tries to emphasize the characteristics of the referendum, the real risk that it may become an instrument of manipulation of the masses, and in the end makes a presentation of the referendum in the Romanian constitutional system. Although the Romanian law promotes both the local and the national referendum, this latter is of particular importance, especially in what concerns the interpretation of the limits of the constitutional reform approved by referendum and the political responsibility of the President before the electorate.

Corruption is an antisocial phenomenon consisting in an illegal agreement between two parties, of which one proposes or promises privileges or illegitimate profits, while the other one, employed in the public service, consents or accepts them in exchange for taking or not taking certain functional actions that include elements of the crimes laid down in the Criminal Code. In Romania, corruption has become in recent years an increasing difficult-to-control phenomenon. It can be said that this scourge is the most serious problem faced by our country and that there is no field of activity free of corruption deeds, while in the sphere of public administration it has raised up to alarming levels. The fight against corruption, despite the results obtained so far, prove incapable to totally eliminate this phenomenon. This is so because, apart from the tacit complicity between the corrupter and the corrupted, the corruption phenomenon continues to be perceived as a mentality, a tradition, a behaviour.

In the last years, the Romanian authorities took the necessary measures to harmonize the national legislative framework with the provisions of the European legislation. While also taking into account the negative aspects, the shortcomings of the way other European countries handled the migration and the asylum issues, in an effort to avoid such problems, these measures have been completely implemented at present.

In their activity of implementing the legal norms, of solving various problems for the functioning of public services, administrative bodies may sometimes infringe upon the citizens' individual rights. Such infringements however can only be repaired with the assistance of other bodies whose purpose is to analyze and evaluate the documents issued by the administration to see whether the latter has exceeded the legal framework and order restoration of the rights and possibly compensations. It is for this purpose that the institution of administrative disputed matters functions as an instrument by means of which those interested may defend themselves against the administration's abuses. In our country, this special procedure is based both on the Constitution and the Administrative Disputed Matters Act No. 544/2004.

The mediator, as a neutral person, has the role to initiate negotiations between the parties and assist them to solve the conflict. Mediation is an effective way to solve conflicts between parties, the negotiator being thus able to assist a coordinated communication and reach a solution through direct negotiation, so that the parties might be able to achieve their goals through formulas that are adequate for the respective situation and finalize the negotiations successfully.
For a mediation to be successful, it is necessary that certain principles should be observed and certain legal and professional conditions be met, which the negotiator may not give up throughout the negotiations.

The exrcise of the right to non-discrimination and equal opportunities in the contemporary society, Editura Pro Universitaria, București, 2012, 214 pagini 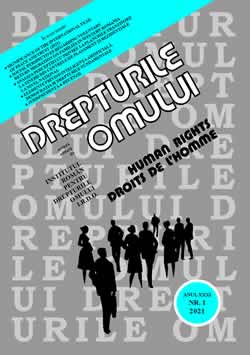